A significant number of the dishes are vegetarian due to the large Hindu population. The Muslim and Christian populations introduced popular non-vegetarian dishes prepared with chicken and lamb. With the long western coastline, fishing is an important business. Seafood is harvested for local consumption as well as exported around the world. Seafood is an integral part of lunch and dinner for the towns and cities on the coast.

Kerala cooking is heavily influenced by the abundance of coconut trees that grow everywhere.  Grated coconut and coconut milk are used in most Kerala cooking to enhance both vegetarian and non-vegetarian dishes. Other fruits that grow in abundance are jackfruit and pineapple. Rice, tapioca (called kappa in Kerala) and koorkai (called Chinese potatoes) are very popular and are part of a staple diet.

Kerala is also the spice capital of India and is the primary exporter of spices such as black pepper, cardamom, cloves, ginger, cinnamon, cumin, coriander and turmeric that are the foundation of Kerala cooking. During festivals, meals are served in the traditional style, on a banana leaf. 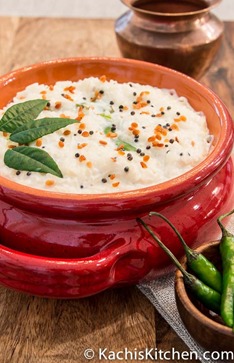 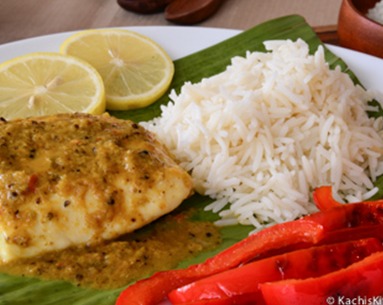 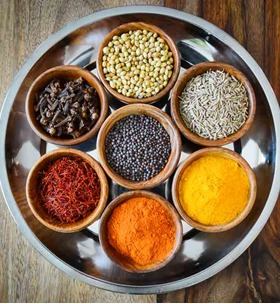 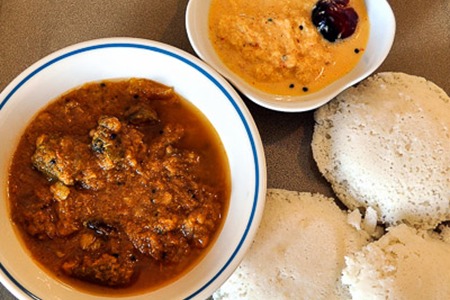 Tamilian meals include many side dishes that accompany the rice dish or dishes that can be mixed with the rice. Many vegetarian and non-vegetarian dishes are included. Thought is required when planning a meal to ensure a complex array of tastes (sweet, sour, salty, acidic, etc.) is included so the flavors are appropriately balanced.  With the large number of Brahmins in this state, many people only eat vegetarian food.

I must mention the sweets and desserts that originated in Madras. They are incredibly delicious and rich so they have become popular throughout India. My favorite is Mysore Paak.

The best of the traditional South Indian recipes from Kerala and Tamil Nadu are included in my South Indian cookbook, Kachi's Kitchen.

The cuisine of Tamil Nadu and Madras is known for some of its hot and spicy dishes that are not for the faint of heart (or stomach). It is also known for its Tiffins (snacks or light meals) including Vada (fried lentil balls), Uppuma (a personal favorite made from cream of wheat) and Cauliflower Bhajia (delicious batter fried vegetables). Tamil cuisine has a unique and distinctive flavor due to the combination of spices used. Tamil Nadu, or Madras, cooking offers more varieties of rice and lentil based dishes than Kerala and is home to the best Sambar and Dosa in the world. Most of the meals served here include a rice dish at nearly every meal.

South Indian food is easily identifiable due to its frequent use of rice, spices, lentils and unique vegetables. Most South Indian recipes contain either dried red chiles or fresh green chiles in addition to garlic, ginger and onions. The generous use of different spices, like cumin, cardamom, coriander, cloves, cinnamon, mustard seeds and peppercorns, give Indian food a special taste. Whether a recipe has gravy, called a curry, or is dry, called a masala, these spices when cooked in multiple layers with onions and tomatoes give the Indian food its distinct flavor.

Even though 60 percent of the Indian population is vegetarian, a large variety of dishes are available which are extremely tasty. Non-vegetarians typically prefer to have at least one meat or fish dish, perhaps both, along with their vegetable dishes. Unlike American cuisine, Indian meals do not focus on a main dish that is complimented by the side dishes. Every dish that is served is equally important to the menu. There are five common attributes to an Indian meal:  aroma, color, texture, taste and variety.

Kerala is a very unique state in India with its diverse coastline on the western peninsula, many rivers and backwater network – an extension of the sea inland – that contribute to its unique cuisine that is very, very different from that of the rest of India.  The cuisine of Kerala is very diverse due to the many groups of people who call this state home with a multitude of vegetarian, meat and seafood preparations. Over the past 2000 years, the cuisine of Kerala was influenced by traders from Europe and the Middle East who visited the coastal towns.

With a very interesting and colorful history, it is no wonder that South Indian cuisine is so delicious and loved by billions of people around the world. Over the last five thousand years, India has been influenced by many different groups of invaders, conquerors, traders and missionaries including the Persians, Greeks, Mauryans, and the Gupta Empire who brought different foods, spices, cooking techniques, cookware and traditions with them. Much of what was brought to India, in some form, was integrated or adapted into South Indian cuisine.

South Indian cuisine is quite different from that of North India and each state in this region has very unique flavors, ingredients, techniques and recipes. This is due to the fact that there were 580 princely states prior to unification into a united India in 1947. Most South Indian dishes are rice or lentil based and a high proportion of them are vegetarian. Sambar (a lentil soup), Idlis (steamed rice cakes), and Dosa (thin rice cakes) are some of the most representative dishes of this region.