1. Puree the roasted peppers in a food processor. Add the garlic, cumin, red chile powder, lemon juice, salt and pepper then let the machine blend the ingredients together.

2. Slowly pour in the oil while the machine runs until the Rouille is creamy. Set aside.

3. Clean all of the seafood. Cut fish into large pieces.

4. In a stockpot, heat the olive oil over medium low heat. Fry the leek, garlic, ginger, and chiles for a few minutes until tender. Add the turmeric, cinnamon stick, bay leaves, tomato, saffron, salt and pepper and fry for a few more minutes. Add the fish stock and wine and bring to a boil. Simmer for 10 minutes.

5. Start adding the seafood. Add the items that take the longest time to cook first, such as any large pieces of fish. Then add the clams, mussels, and large shrimp. Follow this with the small items such as the bay scallops and small shrimp. Discard any shells that do not open. It is important not to overcook the seafood. The total seafood cooking time should be 5 to 8 minutes.Check the salt and pepper and adjust to taste. Remove the cinnamon stick. Stir in the chopped cilantro.

6. Carefully ladle the broth into large individual soup bowls then transfer a selection of each variety of seafood into each bowl. Spread the Rouille on each naan piece and set a few on each plate.

- If fresh naans are not available, use lightly toasted chapatis.

- Since this is a light broth based soup and not a seafood stew, this is a perfect dish for a summer meal. It especially works well for large gatherings since a larger of variety of seafood can be used.

4 green chiles, slit in half

3 to 4 lb assorted seafood including one pound of: halibut, cut into pieces, clams or mussels, shrimp or bay scallops 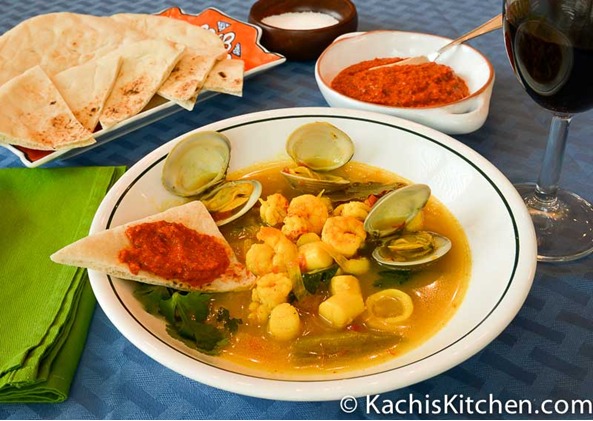 Originating near the Mediterranean, seafood soup has been a popular dish for centuries and may have been created by fishermen in Italy. This recipe is a combination of the traditional Bouillabaisse from Marseilles, France and one from Pondicherry. I found the approach to each interestingly similar and different at the same time. In the French version, one creates a rich broth and then adds the seafood before serving. Its distinctive flavor is due to the ingredients that flavor the broth including onion, tomato, garlic, orange, olive oil, spices and, most important, saffron. The traditional way to present this dish is to remove the seafood from the pot and serve it on a platter. The meal begins with the broth served first in bowls along with toasted slices of French bread that has been covered with a dab of rouille which is a spread made of roasted red peppers and spices. It is appropriately named rouille since the French word translates as “rust.” In a family setting, I prefer to serve the broth and seafood together in large soup bowls.